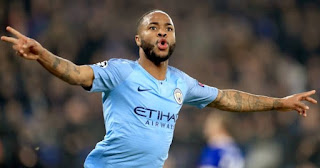 The giants of La Liga want to offer the champions of the Premier League more than 70 million euros, Gareth Bale, who failed to replace Cristiano Ronaldo in Santiago Bernabeu for Sterling, according to Sky Sports.


The newspaper reports that Los Blancos will launch an old offer alongside Pep Guardiola after their representatives will see Sterling appear in England later this month in the 2020 European Cup qualifiers against Montenegro in Wembley and Kosovo in Pristina. .

The report adds that Sterling's representatives met Real Madrid's general manager, José Ángel Sánchez, during the summer, about a transfer to the English star.

Sterling has been impressive for Man City so far this season.


The 21-year-old scored a hat trick in City 5-1 against Atalanta in the UEFA Champions League last month.

on November 04, 2019
Email ThisBlogThis!Share to TwitterShare to FacebookShare to Pinterest
Labels: sports