Mohammed Adamu, inspector general of  police, deployed an additional 35,000 police in Kogi state to "protect" people and property before and during the elections on 16 November. 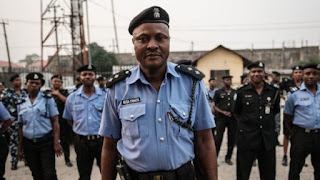 Kayode Ayilara, the deputy police commissioner in charge of the operation in the state, announced on Wednesday in Lokoja.

The police chief revealed this while responding to concerns raised about police neutrality in upcoming elections at an event organized by a non-governmental organization, "Finding Common Ground".

He added that deployed police officers would arrive in the state on November 11, claiming that they came from Abuja and other states.

Ayilara said the armed police would also be positioned in strategic areas identified in the state to ensure a quick response to any emergency.

He said four police officers would be deployed in each of the state's 2,548 voting units, assuring citizens of the neutrality of the police in their behavior before and during the elections.

Ms. Lola Memedu, the head of an NGO, had already spoken during a presentation, expressing concern over the steady rise in state tension before the elections.

Memedu stated that the group, through EECSP project, had observed instances of violence and physical aggression between the Progressive General Congress (PCA) and the People's Democratic Party (PDP).

"There was a series of attacks during campaign demonstrations and party activities.

"The local governments of Dekina and Ankpa have recorded the highest number of violent attacks between party members and supporters.

"For example, on October 19, 2019, a party supporter was shot dead in Anyingba during one of the party's demonstrations.

"The number of deaths recorded in the communities of Anyingba and Ankpa is quite alarming.

"There has been an increase in the use of political thugs to perpetrate violence,
since it was registered in Dekina, Ankpa, Olamaboro, Omala and Idah local government areas, "he said.

According to Memedu, the report's goal is to identify potential threats to peaceful elections before and after the elections.

This, he said, will facilitate a quick response from stakeholders.
such as the police, the INEC and the National Referral Agency to intervene to prevent violence.

The group also urged the media to objectively report on issues related to the process, conduct and outcome of the elections, to calm tensions and prevent violence.
on November 07, 2019
Email ThisBlogThis!Share to TwitterShare to FacebookShare to Pinterest
Labels: news