Three siblings Died after the destruction of a ruined building where they lived with their parents in Akaeze, a region of Ivo's local government in Ebonyi state over the weekend. 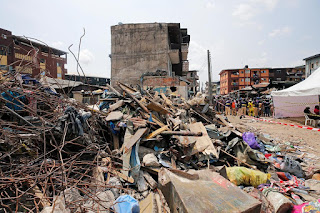 According to reports, the children between the age of 3, 5 and 11, slept in the ruined building with his mother and another brother when the unfortunate incident occurred. It was said that the mother of the dead children had urged her husband to remove them from the building because she feared for their lives, but the husband could not afford it.


The neighbors removed the dead children from the building and buried them, while their mother and their only surviving child are still being treated in an undisclosed hospital at the time of writing this report.

"When I received this information, I ran to the spot and saw that three children died on the spot, while their mother and one of the children were taken to the hospital. It was very critical. ''
on November 05, 2019
Email ThisBlogThis!Share to TwitterShare to FacebookShare to Pinterest
Labels: news