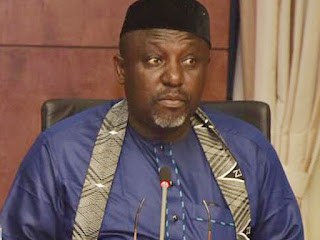 Former IMO state Governor,  Senator Rochas Okorocha has show great fear that the present All Progressives Congress (APC), may go into extinction by the time President Buhari's tenure expires in 2023.

Okorocha said this while reacting to the crisis rocking the party in Edo state where the state governor, Godwin Obaseki and APC National chairman and Obaseki's predecessor, Adams Oshiomole, are battling for control of the party in the state. Just yesterday, political thugs attacked the state governor, the Oba of Lagos and some dignitaries that attended a function at Oshiomole's residence.

Speaking to journalists in Kano state yesterday November 2nd, Okorocha said any political party that has the level of internal crisis being experienced in the ruling party is bound to fail.

“This idea of crisis and idea of commotions show that the said party does not have a common ideology. If the ideology is one and you believe in one thing, there should not be reason for disagreement at that level. You might have a minor disagreement, but when it comes to the issue of do-or-die, it is no longer a political party.

“Talking about what is happening in Edo State, it is unfortunate but a true political party cannot work against itself. So, I want to advise that they reconcile and relax their differences. The truth is that a party that is divided among it can never stand.

I have said this earlier, APC is a party that we hurriedly put together when we were governors because we felt that the government at that time was not living up to expectation and we wanted to make sure that we brought about change at that time.

“That is why we came together and formed the All Progressives Congress and we ensured that the party got power in 2015.  That was how it was then and we achieved that.

“Right now, I think we should continue with the same pace that we started with in 2015 election but that does not seem to be the case. President Muhammadu Buhari gave character to APC. He brought his integrity to bear on the party. He made the party what it is in the northern part of the country and the masses of the North who saw him as a true leader, and we all rode on that to achieve that victory, but after the credibility of Buhari into this party, there seem to be no alternative in the same manner that will drive this party to 2023 victory.

“This is why I expressed my concern that if we are not very careful, APC might go with Buhari in 2023, and that will be a very unfortunate situation for the founding fathers of APC. The party needs to show purposeful leadership, show character,” Okorocha said
on November 03, 2019
Email ThisBlogThis!Share to TwitterShare to FacebookShare to Pinterest
Labels: politics