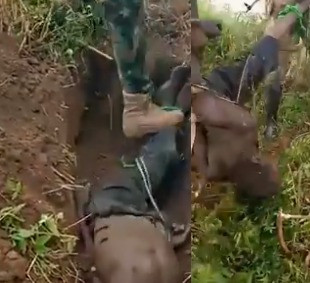 Nigerians reacted in shock when the video showed that the army were pushing the alleged member of the cult into a shallow grave, shooting him and burying him later.

In a statement issued by Acting Director of Army Public Relations Colonel Sagir Musa, the army said it had opened a thorough investigation in an effort to get those involved to deal with the anger of the law. The statement says

The attention of the Nigerian army (NA) was drawn to a video showing NA personnel involved in unprofessional acts of torture and, above all, in the extrajudicial killing of an alleged Boko Haram terrorist who is probably in prison. the northeast theater of operations.

The NA wishes to clearly and firmly condemn the action of those involved (whoever they may be) in the misconduct, and that this cowardly act is totally unacceptable, unethical and goes against core values ​​appreciated by the NA, including respect for others and their fundamental rights

NA training, participation rules and ongoing operational procedures that guide the conduct of all its operations are unambiguous with respect to human rights violations and extrajudicial actions, including the rights of terrorists / combatants arrested / captured.

The troops present in the various theaters of operations in Nigeria have been constantly urged to renounce any violation of rights, regardless of the amount of despair, anger or provocation. NA does not authorize, encourage or endorse unruly and unprofessional behavior, particularly the extrajudicial execution of suspects or combatants. No matter where it is noticed or reported, once confirmed, the appropriate sanction or decisive sanction usually applies to the perpetrators and this case would never be an exception.

As a result, after viewing this bloody video, NA opened an in-depth investigation into the detention of the culprits for treatment in accordance with the prevailing military justice system. Members of the public will certainly be informed of the results of the actions taken so far.

As a responsible and law-abiding organization, the NA will continue to exercise its constitutional functions professionally and will continue to operate within the law in accordance with local and international best practices.

Watch the video below.

Don't want to believe these are soldiers of @HQNigerianArmy. Too horrific! Viewer discretion is advised! pic.twitter.com/tIzm0u3fcc
— Chuks Akunna (@akunnachux) November 4, 2019

on November 05, 2019
Email ThisBlogThis!Share to TwitterShare to FacebookShare to Pinterest
Labels: news