Wenger:Hazard is not the man to replace Ronaldo 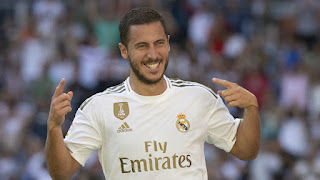 Arsene Wenger does not believe that Eden Hazard is the man who will replace Cristiano Ronaldo at Real Madrid.

The Belgian begins to demonstrate his qualities in Los Blancos after a difficult period after his move from Chelsea.

"That will be the answer, but that will not replace Ronaldo, that's for sure," Wenger told BeIN Sports about Hazard.

"He will not score 50 goals a year because that's how he plays football."

"They need another striker at Real Madrid because Benzema is now 32. If they had a young man among them to score, they might be able to do very well."

"Eden Hazard is an exceptional player to create opportunities to finish sometimes when he needs to do it in big matches."

"He's not afraid of anyone, I do not think Real has seen the real danger yet, he's not as physically strong as he can be."

"That's why I think they will discover the real danger."
on October 12, 2019
Email ThisBlogThis!Share to TwitterShare to FacebookShare to Pinterest
Labels: sports