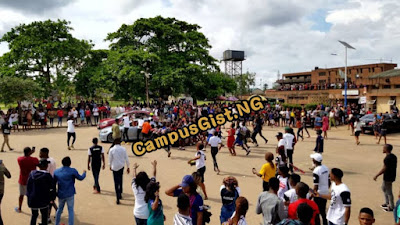 On Friday, a group of engineering students from the University of Benin alerted the school while spraying money all over campus.

Emmy.ng deduced that the engineering boys were prepared in exotic cars to show their wealth on the occasion of the celebration of their last week.

In a video filmed by our correspondent, we could see other students struggling desperately to recover some of the money that was raining.

It is said that a student fainted when he saw the money raining down. Later, she was transported to the school's health center for treatment.

The University of Benin is currently preparing exams in the second semester, while law students have already graduated.

The students spent the day of costumes in their last week of the year at a whole new level, wearing costumes that represent the characters in the movies, surprising their colleagues.


on October 19, 2019
Email ThisBlogThis!Share to TwitterShare to FacebookShare to Pinterest
Labels: Education