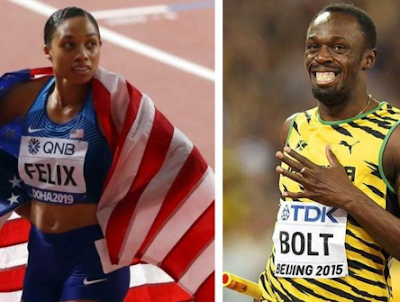 A female US track and field star named Allyson Felix recently went to her home land with her 12th gold medal at a world championship, breaking her tie with Usain Bolt for the most gold medals at worlds, and securing her first gold medal as a mom.

The Young Lady is said to be part of the winning team, which featured Wilbert London, Courtney Okolo, and Michael Cherry in the first-ever world 4×400 mixed relay on Sunday.  “So special, to have my daughter here watching means the world to me. It’s been a crazy year for me” Felix told NBCSN.


The quartet finished their race at 3:09.34, setting a world record for the new event. Just ten months ago, Felix prematurely gave birth to her daughter, Camryn, after enduring a difficult pregnancy where she suffered from severe preeclampsia.
on October 01, 2019
Email ThisBlogThis!Share to TwitterShare to FacebookShare to Pinterest
Labels: sports