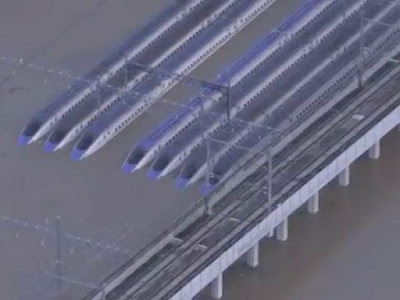 The number of victims of Typhoon Hagibis, the 19 in Japan this year, has been increased to 74. Thousands of residents are still without electricity or water after the strong wind that struck Saturday in eastern and central Japan.

The typhoon also drowned ten high-speed trains of 12 cars operated by Japan Railway Co. The typhoon caused torrential rains that caused the overflow of the nearby Chikuma River.

The 120 cars of the ten trains were damaged by the flood. Two of these trains also derailed and one was swept away 10 to 15 meters from their original position.

This figure represents about one third of all trains used on the Hokuriku Shinkansen line. The line connects Tokyo and Kanazawa in central Japan.

Services should be fully restored in a few weeks. To resume the line, rail operator East Japan Railway Co. (JR East) will use spare trains to restore 80% of normal business hours before October 25. 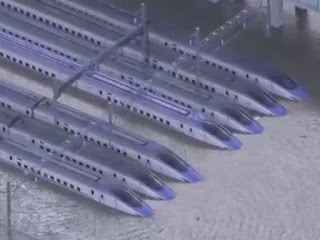 The affected trains will be thrown despite the waterproof characteristics of the landing gear. Operators worry that trains will not operate safely after being submerged for a long time.

According to a specialist in railway systems, the wagons concerned

"Its central parts, including the engine speed control inverters, could have been fatal."

"It would take less time to produce new cars than to replace all the damaged parts."

Each of these fully submerged bullet trains costs about 3.3 billion yen ($ 30 million, or about $ 10.8 billion) in totally new costs.

The world-famous Shinkansen high-speed trains rarely arrive late. Each of these high-speed trains leaves Tokyo Station every few minutes to Osaka and other destinations. Lines are a viable alternative to air transport.
on October 20, 2019
Email ThisBlogThis!Share to TwitterShare to FacebookShare to Pinterest
Labels: Technology