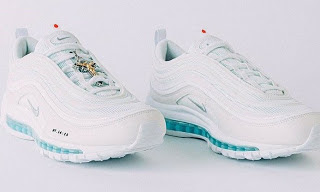 The picture above shows a pair of trainers canvas dubbed 'Jesus shoes' with Holy water injected soles coupled with a mini crucifix and drop of blood on the tongue to match — have begun to go viral on the internet.


The sneakers were made by MSCHF (Mischief), a Brooklyn-based creatives, they sold out the pair of shoe just within a minute of releasing it online on Tuesday, October 8.

The MSCHF rebranded a pair of Nike Air Max 97 sneakers to implement the idea of walking on water with ‘Jesus Shoes’.

Nike was, however, not connected to the project in any way.

The ‘Jesus Shoes’, which are selling for as much as £3,000 (approximately N1.1million), contain holy water from the Jordan river in the bubbled soles, a steel crucifix on top of the laces of the right trainer and a red blob at the tip of each trainer tongue to signify the blood of Christ.

In addition to the holy water, which was blessed by a priest, there is also the biblical verse ‘Matthew 14:25’ — which accounts the act of Jesus walking on water — referenced on the side of the shoes.

The bottoms of the shoes are also dyed a reddish tint to mimic the shoes worn by popes long ago.


“We thought of that Arizona Iced Tea and Adidas collab, where they were selling shoes that [advertised] a beverage company that sells iced tea at bodegas,” Daniel Greenberg, the company’s head of commerce, told the New York Post.

So we wanted to make a statement about how absurd collab culture has gotten. We were wondering, what would a collab with Jesus Christ look like?. As a Jew myself, the only thing I knew was that he walked on water.”

The company also disclosed that more of the sneakers will be available from October 22. 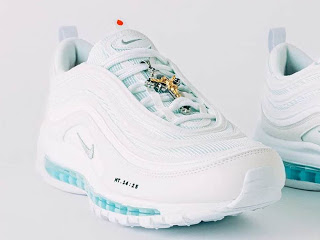