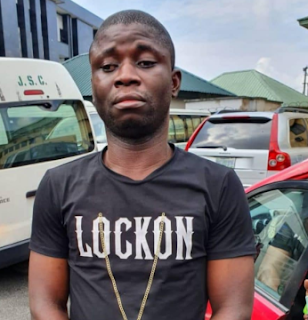 David, the serial killer of Port Harcourt, pleaded guilty to nine of the ten counts of murder against him.

Gracious, arrested on September 19, was prosecuted on Tuesday, October 22, in a Rivers State Superior Court on 10 counts of conspiracy and murder at the Adolpho Enebeli Court of Justice in Port Harcourt. .

Testify in court. Gracious, who asked the court to temper the justice with mercy, admitted to killing the girls in the hotels where he had taken them.

"My Lord, I killed all the other girls in the hotels, but this one in the street Bendel, which is the tenth position. I did not want to kill her, I just tied her to the chair, "he told the court

He claimed to have committed crimes under Satanic influence. He asked the court to force the police to return the N60 000 necklace, watch and wrist, which he withdrew during his arrest.


Meanwhile, the Rivers state government took over the case. The state government, through the Attorney General and Commissioner of Justice, Zaqueo Adango, asked to take over the prosecution and the case was accepted by the judge.
on October 23, 2019
Email ThisBlogThis!Share to TwitterShare to FacebookShare to Pinterest
Labels: crime