After all the proscription of their activities in Nigeria, members of the Islamic Movement of Nigeria otherwise known as Shi'ites, staged a peaceful protest in Utako, Abuja on Friday October 4th.


Members of the Islamic Movement of Nigeria are reported to be demanding the unconditional release of their leader, Ibrahim El-Zakzaky as well as his wife Zeenat. El-Zakzaky has been in detention since December 2015 after members of his sect clashed with men of the Nigerian Army in Zaria, Kaduna state.

July, 2019, the public action  of the sect was proscribed following a deadly clash between them and the Police. The development lead to the Death of many people including a Corps member serving with Channels TV, Precious Owolabi, as well as a Deputy Commissioner of Police in charge of Operations, FCT Command, DCP Usman A.K Umar. 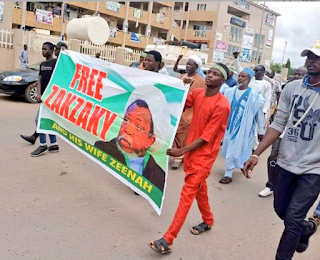 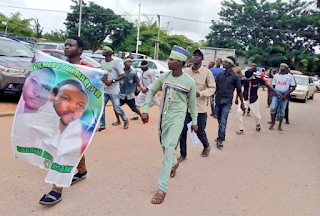 on October 05, 2019
Email ThisBlogThis!Share to TwitterShare to FacebookShare to Pinterest
Labels: news