Osimhen named in the Ligue 1 team of the week 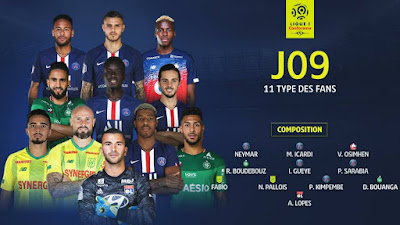 Nigerian striker Victor Osimhen has been named to be in the list of French team of the week in Ligue 1.

The 20-year-old has scored seven goals in nine league games with his club this season.

Former striker VFL Wolfsburg of Germany is also in contention for the Ligue 1 player of the month alongside Islam Slimani of Algeria and Nicolas Pallois of Nantes.

He has already won the title of Lille player of the month of September.

Three other PSG players; Idrissa Gueye, Pablo Sarabia and Presnel Kipembe were also on the list.
on October 10, 2019
Email ThisBlogThis!Share to TwitterShare to FacebookShare to Pinterest
Labels: sports