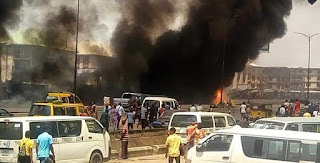 IPOB have said that the oil fire at Onitsha was a terrorist attack.

In a statement by IPFP's Secretary of Public Media and Public Media, Emma, the group said that the consistency with which such incidents occurred in the south of the country had clearly demonstrated that they were being executed by some people.

While sympathizing with those who lost loved ones and their property in hell, the group said no one should be fooled because such incidents were mere accidents.


He wondered why such incidents did not occur in certain areas of the country from which the owners of the articulated vehicles came from.

The statement said in part: "With a deep sense of deep pain and sadness, we sympathize with all the families and communities who lost their loved ones as a result of the Onitsha terrorist attack on October 16, 2019.

"This is not the first time that an articulated truck or tanker loaded with flammable liquid is involved in mass deaths in Onitsha or other parts of Anambra State.

"The story is always the same, whether it's a brake failure on your trailer or the explosion of your tank truck, which results in significant loss of life and the destruction of individual businesses.

"We, indigenous peoples of Biafra, call these acts insensitive and perverse what they are: a cowardly terrorist attack designed by these evil men determined to exterminate the Biafrans from the face of the earth."


He added, "These huge losses in life and business in Onitsha are very unpleasant.

"Why are the Nordic tankers still exploding in the south, or are the brakes on their trailers still failing in the Biafraland? It is time for our people to realize this new reality of population reduction. "
on October 17, 2019
Email ThisBlogThis!Share to TwitterShare to FacebookShare to Pinterest