My life in danger, let me give you your money - Duncan Mighty begs Okorocha

The popular Nigerian musician, Duncan Mighty, warned of the threat to his life after receiving money from the former governor of Imo State, Rochas Okorocha. 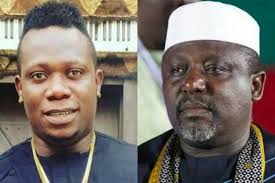 The musician went on Friday to his Instagram page to beg him to return the alleged money that Okorocha had given him to record a song.

According to him, his life is threatened since Okorocha paid him this money.

In his open letter to Okorocha, the "first son of Port Harcourt", as he is commonly called, begged to return the money, adding that the police had also invited him to appear in court.

He wrote: "Your Excellency, Owelle Rochas Okorocha, congratulations for the season. I write to inform you that my life is threatened by the money you paid to record a song with one of your boys.

"After recording the song before making a video, they invited me to the police and made several threats.

"Please, I want to pay you back to avoid shame on me."
on October 27, 2019
Email ThisBlogThis!Share to TwitterShare to FacebookShare to Pinterest
Labels: Entertainment