Mizanbilu Yusuf, an 18-year-old boy, was arrested by the #Niger State Police Command for allegedly raping a 9-year-old girl. 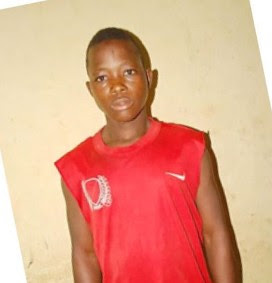 The suspect confessed to raping about six minors in the Kafin Koro community. The victim's father had reported Yusuf to security guards.

When they marched, the suspect revealed that the act began at the age of 17. Yusuf, who promised to behave well if he had a second chance, said, "I was there and I enjoyed doing it. .

I do it when I'm excited to have sex and as I do not have a girlfriend, I decided it would be easier to have a carnal knowledge of the miners in my area to calm the tension.

I contaminated a lot of miners in the area, about six. It is unfortunate that I found myself in this desperate act. I want to warn other teens to avoid this evil act. It can destroy your future, "he advised.
on October 14, 2019
Email ThisBlogThis!Share to TwitterShare to FacebookShare to Pinterest
Labels: news