MASSOB: Do not build toll gates in the southeast, we will dismount at 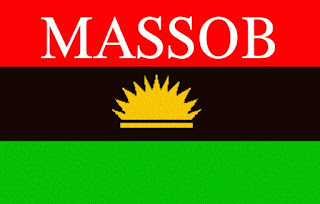 (MASSOB) warned the federal government against the construction of toll gates in the southeast region.

The federal government recently announced its decision to restore toll gates on federal roads across the country.

In a statement by its spokesman, Uchenna Madu, the secessionist group pledged to dismantle any toll gate observed in the predominantly Igbo area.

Describing this policy as a vicious plot against local residents, the group said the previously available data indicated that the region would have more toll gates than other regions, despite the deplorable state of federal roads in the region .

"The Igbo states are higher with 21 tolls, which is consistent with the fact that Igbo is besieged and exploited.

"The southeast has more police checkpoints than any other region. it has the largest number of federal roads in poor condition; It has the smallest land mass and the shortest distances from one point to another compared to other areas, and also has the worst road network in Nigeria.

"The lands of Igbo and Biafra can never be an experimental ground for the deployment of perversities, malice, hatred, genocide, extrajudicial killings by the police, military terrorism, political enslavement and massacres. without foundation of innocent and unarmed citizens.

"MASSOB condemns and insists that there will be no toll in the country of Biafra, as the Nigerian government has perversely proposed. MASSOB wonders how the establishment of these toll barriers in Nigeria will work, "the statement said.
on October 08, 2019
Email ThisBlogThis!Share to TwitterShare to FacebookShare to Pinterest
Labels: Biafra