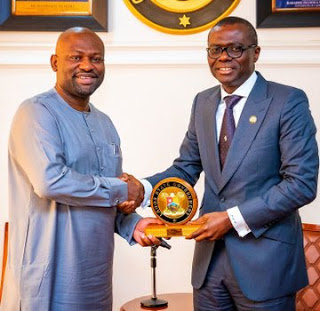 Yesterday Evening, a new report came to our desk that the Ijegun Egba tank Farm Manager and the operation association has recently gotten an approval from the Lagos State Governor, Sanwo-Olu to reconstruct and dualize Ijegun road leading to the farm area..

On Monday, the information was made public by the state Government, which applauded the association for coming up with the partnership.

Sanwo-Olu Government also included that his administration is open to further partnership that will bring about development at the grassroots.

Below is a statement released by Lagos State Government,

The Lagos State Govt LASG & Ijegun-Egba Tank Farm Owners and Operators Association will henceforth work together for the regeneration of infrastructure in the area.

At a meeting with Governor Babajide Sanwo-Olu in Alausa, the leadership of the association requested the approval of the State Government to re-construct and dualise the road leading to the tank farm base in Ijegun.

Sanwo-Olu welcomed the development, saying the State would be setting up a team that would come up the partnership framework with the objective to make the deal beneficial to the residents, the Government and the tank farm owners.

The Governor hailed the tank farm owners for coming up with the intervention, noting that his government would remain open to partnerships that would bring solution to challenges facing people at the grassroots.
on October 15, 2019
Email ThisBlogThis!Share to TwitterShare to FacebookShare to Pinterest
Labels: news