Griezmann on Selling List of Barcelona Over Unreal Relationship with Messi 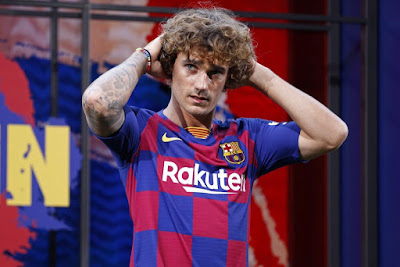 The Catalan Giant is pop up in consideration to put  GRIEZMANN IN market Next Summer, despite only signing him this summer from Atletico Madrid for £107million “over Messi relationship”

The Barcelona Player in seven Laliga Show up net three Goal, but has publicly admitted he is struggling to form a relationship with captain Lionel Messi

A French publicity company, Le10sport, Shared with Torixus Media that the Barcelona fc have taken this admission so seriously, that they are considering the France foward and will make another attempt to re-sign Neymar from Paris Saint-Germain.


The Table men of Barcelona believe that an offer of cash plus Griezmann, could be too good for PSG to refuse.

Messi, Neymar and Luis Suarez formed a fearsome partnership during their time together between 2014-2017 and they were widely regarded as one of the deadliest attacking trios of all time.
on October 05, 2019
Email ThisBlogThis!Share to TwitterShare to FacebookShare to Pinterest
Labels: sports