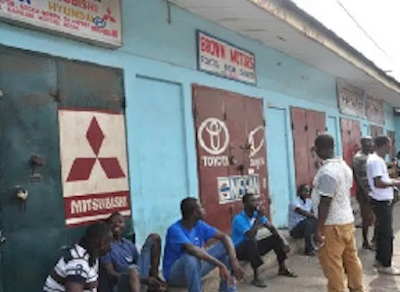 On Thursday, October 31, members of the Ghana Association of Trade Unions (GUTA) closed Nigerian-owned stores in five markets in Kumasi, the capital of the Ashanti region.

It was the second time this year that the association closed Nigeria-owned stores, claiming that it was waging a war against foreign retailers in the country.

According to the GUTA, foreign retailers are unaware of Article 27 of Ghana Investment Promotion Center (GIPC) Law 865, which prohibits them from participating in the sale of goods or the provision of services in a market. at retail or in the street. The sale of property occupying any position must be reserved for Ghanaians.

The law also prohibits foreigners from operating taxis, beauty salons, selling medicines, producing and selling water in sachets, among others. The markets on which Nigerian merchants have been excluded are Kejetia, Suame Magazine, Adum and Asafo.

GUTA Public Relations Manager Albert Mensah Offei told Joy FM that the action would soon be extended to other parts of the country. However, according to Ghanaweb.com, the action of the association is interpreted as a retaliatory measure following the closure of the Nigerian land border, which affected traders in the West African region.

GUTA recently noted that the closure of Nigeria's trade borders with Benin and other neighboring countries constituted a total violation of the ECOWAS treaties. Association President Joseph Obeng, who spoke with Accra-based Joy FM, said the Ministry of Foreign Affairs and the ECOWAS parliament had not checked Nigeria. He argued that this was sufficient evidence that all ECOWAS treaties and protocols were ineffective.

"Nigeria made a blatant mockery of the ECOWAS protocol if there is such a thing already. Surprisingly, the Foreign Ministry has not solved this problem, nobody talks about it and for two months, Ghana's assets have been immobilized in Nigeria. This act by the Nigerian government cancels the entire ECOWAS treaty on the free movement of people and goods, "he said.
on October 31, 2019
Email ThisBlogThis!Share to TwitterShare to FacebookShare to Pinterest
Labels: news