Female Banker, Adewunmi in Net for Fraud In Osogbo

On Tuesday, October 8, A 51 year-old female banker, Yetunde Iyabo Adewunmis Was entenced to one year imprisonment for conspiracy, aiding and abating fraud. 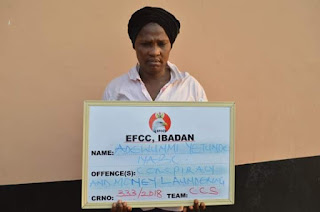 Owing to the findings, the Commission is one of the five-counting boarders on the subject of money laundering, but later it is possible to do so.

She pleaded guilty to the charge and was accordingly convicted.

The prosecution counsel Shamusuddeen Bashir had earlier prayed the court to accept the conditions of the plea bargain which included the restitution of the proceeds of crime, and that the Commission had indeed received the sum.
on October 10, 2019
Email ThisBlogThis!Share to TwitterShare to FacebookShare to Pinterest
Labels: news