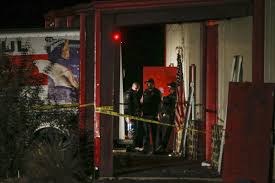 A shooting that occurred in the early hours of Sunday, October 27, after hundreds of students gathered at The Party Venue in Greenville, near Dallas, to celebrate the beginning of a new period at Texas A&M Commerce College, according to reports, left two people dead.

Fears that more than a dozen people were shot seem to be confirmed by Hunt County officials, who told local media that three air ambulances took some victims to a trauma hospital.

"We have a lot of injured people walking," said a Hunt County deputy in the scanner, according to a WFAA reporter.

‘Greenville reports of a mass shooting at a party place with several victims. ‘

Multiple lifeguards in the scene. They told me it was a welcome party and that there are fatalities. "

The graphic video of the shooting published on social networks shows at least 3 victims on the ground while a crowd of young people disperses. They told me it could have been a party in which several Texas A&M Commerce students participated.
- J.D

It is not clear how many were in the building when the gunman who is now free opened fire with a rifle, however, it was deduced that the first official response to the incident occurred at 3:15 a.m. from the Texas A&M Commerce police.
on October 27, 2019
Email ThisBlogThis!Share to TwitterShare to FacebookShare to Pinterest