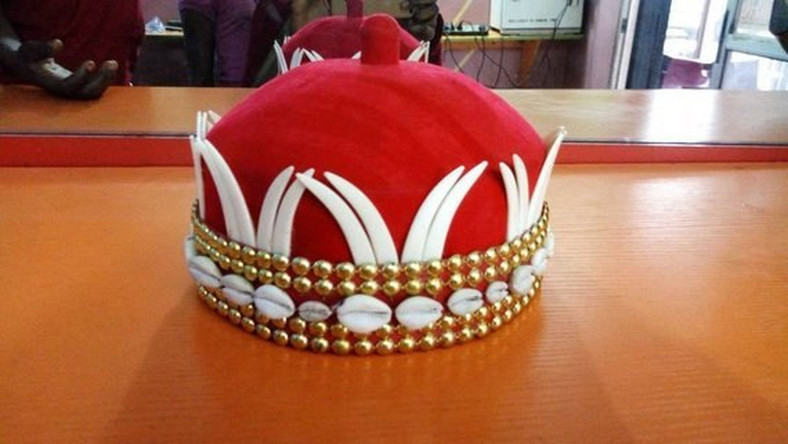 File photo: An Igbo crown
The Anambra East Traditional Rulers Council has slammed a one-year suspension on the traditional ruler of Umueri community, Igwe Ben Emeka, after being caught “violation of the customs and tradition of Igbo land” governing breaking of kolanuts, Sun News reports.
Chairman of the council and the traditional ruler of Mkpunando Aguleri –Otu community, Igwe Alex Edozieuno who signed the suspension notice dated January 31, 2019, noted that Igwe Emeka had been barred from attending meetings of the council for one year.
Giving insight into what led to the suspension order, the council noted that the Okebo of Umueri “grabbed the kolanuts from the hands of Chief Tony Oli who represented Governor Obiano during his thank-you visit to Otuocha community.
“The Chairman, Anambra East Traditional Rulers Council, Igwe Alex Edozieuno, advised him to keep quiet and play to the rules because he is the youngest of all the traditional rulers. He started abusing him instead that he is from “mmanyi” (i.e across Anambra River) and should not expect to be the one to break the kola-nuts.
“Ezendo Mkpunando reminded him that he is from Uromi in Edo State. Chief Oli asked them who their chairman was and Okebo rightly said that Ezendo Mkpunando, Igwe Edozienu was their chairman.

The chairman who is now 16 years on the throne respectfully recognised the presence of Igwe Chukwuemka Eri of Enugu Aguleri-Uno community who is now over 30 years on the throne and Igwe Okalakwu of Igbariam also over 30 years and as well the Patron of the Council of Traditional Rulers. He handed over the kolanuts to Igwe Okalakwu their patron to perform Igbo prayers.”
Giving further insight into what transpired, the chairman of the Council of Traditional Rulers noted that at this point, Igwe Emeka got annoyed and insisted that he was the rightful person to break the kolanuts because he claimed that he was the son-of-the-soil and started another quarrel with the chairman which resulted into fracas in the presence of the governor and their subjects.
The council, while handing down a disciplinary action on the traditional ruler described his action as a gross misconduct and flagrant violation of the etiquettes of Igbo customs and tradition.
They asked Umueri community to nominate another person to be representing them in their council meetings till the suspension order elapsed.
on February 04, 2019
Email ThisBlogThis!Share to TwitterShare to FacebookShare to Pinterest