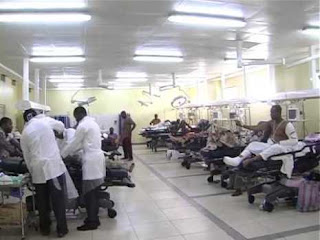 Emmanuel Ezunu, Head, Clinical Services and Training, Federal Medical Centre (FMC), Asaba, has confirmed the death of a housewife who died 15 hours after she was delivered of a set of quintuplet, the News Agency of Nigeria, NAN reports.

Mr Ezunu who made the confirmation to News Agency of Nigeria (NAN) on Tuesday in Asaba, said Chukwunonso Onyejekwe, 29, died of complications after delivery.

According to him, the deceased suffered acute respiratory failure and died after a successful Cesarean Session (CS) delivery.
NAN gathered that late Mrs Onyejekwe was delivered of a set of five female babies.

Mr Ezumu said that the woman was brought into the hospital as an un-booked patient, and due to her emergency condition, she was taken straight to the theatre.

“The woman in question was brought to the FMC, on the 28th of January 2019, un-booked; that is to say, she was not a registered patient here.

“Also, when she came, we noticed that her blood pressure was so high and the condition put her in a high risk for a normal delivery.

“So, we recommended a caesarean session for safe delivery and she was moved to the theatre for an emergency CS,” he said.
According to the medical officer, the woman never knew she was carrying a set of five babies.

He said late Mrs Onyejekwe told the hospital that the last scan she had revealed she was carrying a set of triplet.

Mr Ezunu said that doctors in the hospital successfully delivered the woman of a set of quintuplet at about 9 p.m. same day.

“We delivered the woman of a set of quintuplet, but moments after the delivery she developed respiratory failure.

“We had to rush her to the Intensive Care Unit (ICU) where doctors and nurses battled unsuccessfully to stabilise her deteriorating condition.

“Unfortunately, the woman gave up at about noon the next day,” he narrated.
Also speaking, Oyefara Babatunde, the Head of Department of Obstetrics and Gynecology in the hospital, corroborated Mr Ezunu’s position on the unfortunate incident.

Mr Babatunde, whose department handled the emergency delivery, disclosed that the babies were 31 weeks old upon delivery.
He said after the delivery the woman twice suffered cardiac arrest in a space of thirty minutes while at the ICU.

“It is a complication that has to do with difficulty in breathing. We tried to stabilise her and while we were battling with that she fell into cardiac arrest.

“We were able to resuscitate her but moments later she fell into a second cardiac arrest. The complications were multiple; they were also occasioned by her high-risk quintuplet pregnancy.

“Pulmonary Throb Embolism is a condition of abnormal blood clot formed in the lower limbs and released massively into the lungs.

“It is so unfortunate that the woman died because after the successful delivery of five babies, the whole hospital was jubilating.

“But our joy and jubilation was turned into sadness and cries. It is really a sad incident.

“However, the five babies are currently under intensive care at the hospital and I can inform you that they are doing fine,“ he said.
on January 31, 2019
Email ThisBlogThis!Share to TwitterShare to FacebookShare to Pinterest