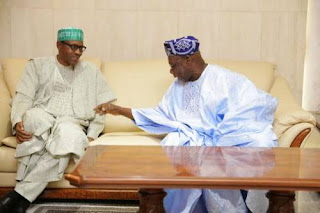 On January 20, 2019, Obasanjo had held a State of the Nation broadcast in which he said Nigerians would be "fools" — himself inclusive — if Buhari is reelected into power next month.


The next day, in a video published by BBC, Obasanjo also said Buhari is sick in the body, mind and spirit.

In his most recent take on Buhari, the former President, who was the guest speaker at the Island Club Quarterly Business Lecture, on Wednesday, criticised Buhari for his lenghty absences from office and the country on medical grounds.

In the years since he was sworn in as President of Nigeria in 2015, Buhari has spent 104 days outside the country on medical vacation.

However, speaking on the competence of his former vice, Obasanjo said since he didn’t spend 104 days outside the shores of the country, people may not know that Atiku stood in his stead in many capacities while they were in charge of the country’s administration.

According to Obasanjo, contrary to popular belief, Atiku presided over several Federal Executive Council (FEC) meetings under his 1999-2007 administration.on the latter’s medical vacation.

He also stated that one of the most ridiculous claims he has heard is that he did not trust Atiku, who is the presidential candidate of the Peoples Democratic Party, to preside over the FEC.

His words: “That is not true because he had occasion to preside a few times that I was out of the country on duty. On those occasions, he was in charge of the FEC meetings and no Nigerian chief executive has devolved to his deputy as much as I did to Atiku.

“I did not need to designate him ‘acting president’ because the constitution is clear; once the president is not available, the vice president automatically acts with full powers, and he consults when and if he considers it necessary.

“But since I was not absent from home for 104 days at a time, people may not know that Atiku actually stood in for me whenever I was out (of the country).