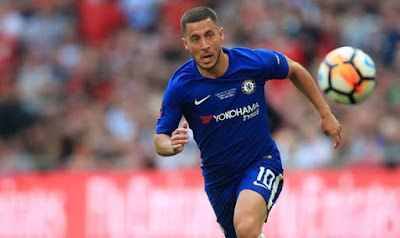 The Chelsea number one player, Eden hazard has made a public pronouncements saying that Joe Cole  convinced him to join Chelsea when he was at Lille. The Englishman announced his retirement from football this week and spent his best years at Chelsea winning three Premier League titles.

When the Chelsea legend was playing for Liverpool, he spent time on loan at Lille, where Eden Hazard first burst onto the scene.

‘I spoke to him before I signed for Chelsea. Every day, seriously, he was telling me that Chelsea was the best club for me.

‘He said Chelsea was a big club where you can win trophies every season. For that reason I signed, so thank you, Joe Cole.’

The Blues fans will be thankful for Joe Cole’s intervention, as the Belgium international is now their most influential player. Eden Hazard is the early frontrunner for Premier League player of the year after a spectacular start to his season with Chelsea.

The 27-year-old has scored eight goals and provided four assists in 14 matches this season. Chelsea fans are delighted with Hazard’s form but fear the forward may be in his final campaign in London
on November 14, 2018
Email ThisBlogThis!Share to TwitterShare to FacebookShare to Pinterest