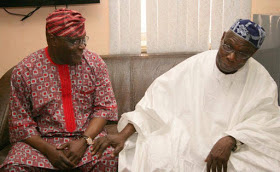 Atiku, however, hopes to convince the former president to support his ambition, hence the visit.

He arrived at 1:20 pm at Obasanjo. He was accompanied by the PDP National Chairman, Uche Secondus, the Director-General of the Atiku Campaign Organization, Gbenga Daniel, Ben Bruce and many more.

Atiku was the vice president when Obasanjo ruled Nigeria between 1999 and 2007. Lets see how it will evolve! Politics !! 😀
on October 11, 2018
Email ThisBlogThis!Share to TwitterShare to FacebookShare to Pinterest
Labels: politics