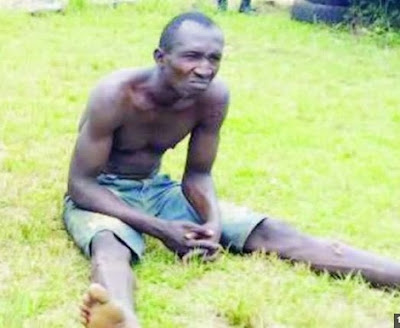 The Imo State Command of Nigeria's Civil Security and Defense Corps arrested an alleged armed thief, Mishael Okeke (31), who pretends to be suffering from mental illness.

Criticizing the suspect on Tuesday, NSCDC state commander Raji Ibrahim said Okeke was arrested on Monday at a compound in the Ama Awusu area in the Owerri metropolis after a call from one of the inhabitants.

Ibrahim said the suspect, whose body was full of scars, climbed the fence, adding that he told the NSCDC men that he was hungry and looking for food.

"He (the suspect) claimed he was not an armed thief, but a man who had been hungry for three days, and said hunger forced him to climb the fence to beg for food from the locals. at 12:11.

"Although no part was found at the time of his arrest, the fact that he disguised himself in denim shorts and a shirt with neglected hair gave the impression that he was a dubious man. "Ibrahim said.

The suspect, who claimed to be from Ihitte Uboma in Imo State and a graduate of a federal polytechnic, denied, however, that he was a thief.

He stated that he was doing subordinate work and had come to Owerri looking for work.

"For three days, I was in the area looking for a job, but I did not get it, I used the little money on me to eat, and for the three days I did not I'm not bathed and I slept in front of a closed shop in the area.

"The third night, I was desperately hungry, all that I asked for money to eat did not look at me, let alone help me.

"When the hunger wanted to clear my eyes, I went to this place while I saw exotic cars parked, I knocked on the door a few times, but no one came out." The next alternative was climbing. fence in the compound to make noise, so they can go out, "he said.

He said that when the occupants finally went out, they did not allow him to explain but instead took him out of the compound.

"When I was about to leave the compound, they called me back and called NSCDC agents who arrested me," he added.

The suspect, however, admitted that when he was arrested, he claimed to be insane in order to trick the NSCDC agents and escape.
on August 23, 2018
Email ThisBlogThis!Share to TwitterShare to FacebookShare to Pinterest
Labels: news