Man ASSAULTS Barber After Getting Dodgy Haircut In Germany 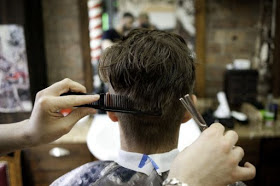 A 34-year-old German was apparently so appalled by his height that he used pepper spray on his hairdresser.

The man, whose identity has not been revealed, is said to be ruminating after being cut on Wednesday in Bremen.

He left early but was so annoyed that he decided to come back, the police said.

The man then went to his 52-year-old hairdresser, sprinkled him, then showed him his middle finger.

He then skated but the police quickly caught him and he was arrested.

A 23-year-old staff member was reportedly injured after being caught in the cross fire of pepper spray.

The man faces a charge of assault and may also be charged with violating the Explosives Act after the police found a firecracker in his possession.
on August 27, 2018
Email ThisBlogThis!Share to TwitterShare to FacebookShare to Pinterest
Labels: news