If You Are Not Driving A Car, Don't Approach Me - Ghanaian Actress

Yaa Jackson revealed that now she will only pay attention to the guys driving new cars. 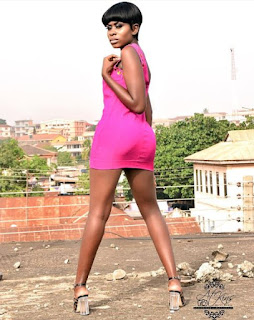 She says she is no longer interested in those who drive used cars. We bet you can imagine the fate of those who do not even own a car at all.

Yaa Jackson, who is just 19 years old, made this revelation in a video she posted on her Instagram account. The young actress who started playing at about the same time with Maame Serwaa also got into the music and even released her first single.

Wearing a shirt with her pimples open, exposing parts of her round breasts, the actress revealed that this time girls like her are no longer interested in hanging out with guys, so if a man wants to go out with her, the person should be ready to go out. buy his new clothes and drive a new car.

We only hope she did not want to say that her first single is titled "Tear Rubber".
on August 21, 2018
Email ThisBlogThis!Share to TwitterShare to FacebookShare to Pinterest
Labels: gossip