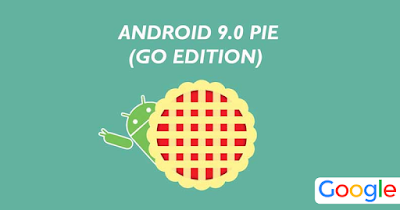 Google's most used and widely used mobile operating system, Android, has always been a more demanding operating system than its competitors, requiring more features and better hardware to deliver a good user experience. However, now, to overcome these limitations, Google has announced the new Android 9 Pie Go Edition.

Google has announced the new edition of Android 9 Pie Go
Google, to try to counter this reality, has launched Android (Go edition) which brings various improvements and optimizations in various settings. After its debut in Android 8 Oreo, Google announced the Android 9 Pie with even more news.

Emerging markets, generally equipped with more modest hardware and device specifications, are the big target of this Android edition Go. The standard versions of Android are often too heavy and demanding for entry-level devices.

Read also: How to secure your PC against hackers

Last year, Google launched the Android edition Go, already present in two hundred models of smartphones in over one hundred and twenty countries. Currently, it is possible to find smartphones with this operating system in smartphones, such as the Nokia 1, the Alcatel 1X, the LAVA Z50 and much more.

Following what was expected, Google has announced that it will continue the development of the Android edition Go. In addition, the new features that will be present in the Android 9 Pie (Go edition), which will be launched in the fall this year, will they be presented.

On modest devices with little internal storage, 8 GB is the example given by the technology giant Google, these savings will have a considerable influence on the versatility of equipment. With Android (Go Edition), you'll have plenty of space for your files and to install applications.

In addition to the measures applied to the core of the operating system, Android (Go edition) has a set of Google applications specially developed for this version.

The Google Go app allows you to read web pages aloud, highlighting the text read in the process. Something more interesting is present in YouTube Go that allows you to download videos for later viewing, even offline.

The Go Maps supports navigation with detailed instructions, which brings it closer to the standard version available on other Android smartphones. The Files Go application will be able to transfer data in peer-to-peer mode without the need for an Internet connection and speed up to 490 Mbps.

Even the Google Go wizard is present in this version of Android 9 Pie (Go edition) and will also support several languages. In addition, the level of functionality will now have controls to control the camera, flashlight, reminders and Bluetooth.

Google's attempt to attack emerging markets is thus reinforced, which could be the entry of many users into the world of smartphones and the consequent abandonment of traditional mobile phones.

So, what do you think? Simply share all your thoughts and reflections in the comments section below.

on August 24, 2018
Email ThisBlogThis!Share to TwitterShare to FacebookShare to Pinterest
Labels: Google, news