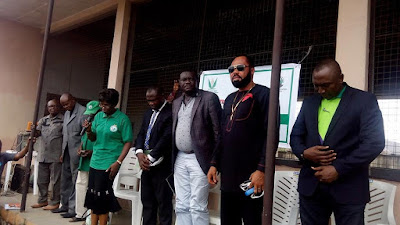 A civil society organization (CSO), "67 million initiatives," has ranked Ebonyi, Akwa Ibom and Enugu among the top states with the highest youth participation in politics.

One of the group's organizers, Luqman Edu, revealed it at a press conference in Abuja on Friday.


Edu said the assessment was done for 18 to 45 year olds.


He noted that data were collected by group members in different states to reveal the rate of youth participation in their states as part of his "initiative".

The facilitator said the report would be published regularly to show the performance of the federal and state governments regarding young elected officials.

According to him, the goal is to promote youth participation in politics.

"Ebonyi has the highest youth participation rate at 36%, followed by Akwa Ibom and Enugu with 34% each, with Bauchi fourth at 32%.

"Meanwhile, Yobe and Kwara States recorded the lowest turnout of youth with 5.67%, followed with 7.67% Ogun, Osun, Jigawa and Bayelsa with barely 9.67%.

Edu said the data revealed the low participation of young people in politics, a story the group was working to change.

Another organizer, Mark Okoye, Commissioner for Budget and Planning in Anambra, said that "Initiative 67 million," was a coalition of Nigerians whose mandate was to mobilize young people to participate in politics.

Okoye said the goal of the group was to create a voice for the 67 million young people, regardless of religion, political party, tribe or gender.

He said the goal was to build and take advantage of youth block voting for their interest in having many young people appointed to various positions in the states.

Mr. Muhammed Abdulahi, Commissioner of the Ministry of Budget and State Planning of Kaduna, said the group would begin its work at the grassroots.

Abdullahi said that for the 2019 elections, the group would support the emergence of young candidates on all political platforms at the State and National Assembly levels.

He said that with this initiative, states would be closely monitored to find out the level of youth in elected offices while advising them to secure elective positions.

Mr. Asuquo Ekpenyong, another organizer and Commissioner for Finance in Cross River, said the group believed in the basic policy to support young people who were fighting for positions at the base.

Ekpenyong said the group also believed in the growth of youth in politics, so the focus was not yet on the presidential race but on the assembly chambers and the National Assembly.

He said in this way that young people would learn the principles of the race for elective positions.
on August 18, 2018
Email ThisBlogThis!Share to TwitterShare to FacebookShare to Pinterest
Labels: news