'CBN Worker Begged Me To Kill Him, He Was In Secret Society' - Murder Suspect 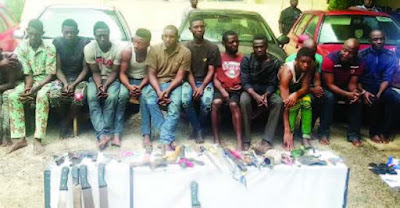 49 police charged with murder, robbery and others

The FCT Police Command on Monday presented 49 suspects for alleged involvement in killings, armed robbery, robbery and other crimes.

Two of the suspects; Alfred Leonard and Samson Agbo were alleged to have allegedly killed Michael Iorkohol.

According to the Piyako community in Abuja.

The police recovered from the suspects the wrist watch, the belt, the palm sandals, the bank card and the identity card of the deceased.

Speaking at the parade, CTF Police Commissioner, CP Bala Ciroma, said, "The command has noted a new step in its fight against the crime of Alfred Leonard, 29, and Samson Agbo, 37.

"At first, the family reported a disappearance to the Karu division on July 17, 2018 pretty much

1930 hours but during the investigation, we learned that the hand suspicious; Alfred Leonard was the last person seen with him.

Leonard, who was last seen with the deceased in Kaduna after discreet investigation.

"The suspect confessed during his interrogation that he had been associated with Samson Agbo to murder the deceased when he was found in the community of Piyako."

Among these were also included; Kolawole Akin, Rasheed Kareem and Isah Ibrahim.

Police said they were journalists in Abuja.

They were arrested at a church in Asokoro neighborhood in Abuja where they were picking pockets.

Ciroma said: "On August 11, 2018, police arrested three suspects who usually disguised themselves as journalists to steal money, phones and other valuables from public gatherings.

"The suspects who operated mainly in a church in Asokoro."

Speaking of his involvement in the murder, Leonard said, "Mike was a sick person and I had been treating him for eight months.

"He told me that he was in a secret society and asked me to know his family members.

He also told me that they would give him an hour to die on Sunday and he would die. He was not killed because I am a Jukun by tribe and killing in my place is a crime.

"My friend was there when everything was in there."

He continued, "I did not kill Mike with my hand, Mike begged to be killed, Mike told my colleague he should be killed, scratching his back and fetching blood, he will die.

"We did not kill him because we wanted something from him, my friend scratched him and he died."

In addition, one of the fake journalists, Akin said, "I'm working with African Peoples Voice, and we were on our way to Asokoro to get something on the front of the church.

"We went and disguised as journalists." We went to such gatherings like that to steal the goal.


"Normally, we go to gatherings of this type to look for pockets because people do not suspect that journalists will steal."

The PC said the suspects would be brought to justice after the investigation.

He also assured the members of the Court that the Eid Court
on August 22, 2018
Email ThisBlogThis!Share to TwitterShare to FacebookShare to Pinterest
Labels: news