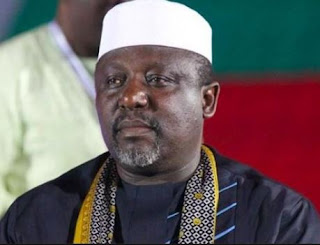 The governor of Imo State, Rochas Okorocha, promised a reward of 20 million nairas to anyone with useful information about the assassins of a leader of the All Progressives Congress (APC) in the state.

The governor made the promise today, hours after Sunny Ejiagwu, the APC chairman in the Ideato North local government area, was killed by gunmen suspected of being murderers.

The late Ejiagwu was murdered four days after he was elected CPA President in the LGA along the Orlu-Akokwa road on his way home from attending a meeting at the APC Secretariat in Owerri, the capital of the state.

Nwafor said the killing was capable of causing political chaos in the state. He called on security agencies to urgently launch a human hunt for law enforcers. He recalled that the deceased had feared for his safety Thursday at one of its meetings, denouncing the unstable nature of his local government.
on July 28, 2018
Email ThisBlogThis!Share to TwitterShare to FacebookShare to Pinterest
Labels: news