Shocker: Lagos Man Arraigned For Beating Wife And Stabbing Her On The Head 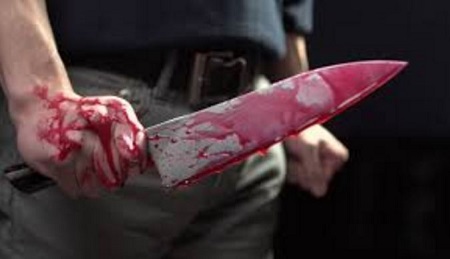 File photo used only for illustrative purpose
Lateef Saka, a transporter, has been arraigned before the Ebute Meta Chief Magistrates’ Court in Lagos for allegedly stabbing his wife with a kitchen knife, NAN reports.
The 36-year-old is facing a charge of assault for stabbing his wife on her head.

The prosecutor, Sgt. Kehinde Omisakin, told the court, that the accused committed the offence on Jan. 18, about 11.00 p.m at his residence: No. 27, Jebba St., Ebute Meta, Lagos.
Omisakin said the accused was fond of beating his wife, and on the said day beat her to a pulp before using a kitchen knife to stab her on the head, causing her to bleed profusely.
The offence contravened Section 173 of the Criminal Law of Lagos State, 2015.
The accused, however, entered a plea of innocence to the charge.
The chief magistrates, Mrs A. O. Ajibade, admitted the accused to a bail of N50,000 with two sureties in like sum.
Ajibade adjourned the case until February 22 for further hearing.
on January 20, 2018
Email ThisBlogThis!Share to TwitterShare to FacebookShare to Pinterest