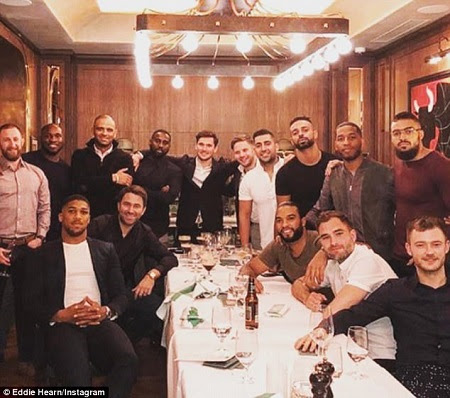 (L-R) Standing: Mark Ellison (nutritionist), Ben Ileyemi (cousin), Michael Jarman (agent), David Ghansa (friend), Freddie Cunningham (manager), Frank Smith (Matchroom boxing), Sina Ghami (Physio), Jonathan Constant, James Mulley, Kevin Ayodele (friends). Seated: Joshua, Eddie Hearn (promoter), Leon Skinner (friend), Jamie Reynolds (conditioning coach), unknown
Anthony Joshua who is still basking in the euphoria of his recent victory over Wladimir Klitschko, has deemed it fit to hangout and enjoy a meal with the team that propelled him to boxing super-stardom.
Joshua added the vacant WBA ‘super’ heavyweight title to his IBF strap when he climbed off the canvas to stop the Ukrainian in the 11th round of the Wembley scrap.
Daily Mail UK reports that as he continues to plot his next move, Joshua spent a night out at the Smith and Wollensky restaurant in London with the friends, promoters and trainers who helped him overcome Klitschko.
Joshua and his entourage enjoyed a night out at the Smith and Wollensky restaurant in London
The 27-year-old was joined by the likes of his nutritionist Mark Ellison, cousin Ben Ileyemi, manager Freddie Cunningham, and strength and conditioning coach Jamie Reynolds.
Friends Jonathan Constant, James Mulley, Kevin Ayodele and Leon Skinner also enjoyed the night out alongside Matchroom’s head of boxing Frank Smith and Joshua’s promoter Eddie Hearn. His head trainer Rob McCracken was not pictured, however.
Hearn has guided Joshua since the Watford-born fighter turned professional. But the 37-year-old was booed by the Wembley crowd when interviewed after the fight. And he jokingly slammed the world heavyweight champion for failing to ‘have his back’.
'Ninety-thousand people were booing me, it would have been nice for the man I shared a journey with to step up to the mic and have my back. But it’s okay,’ Hearn joked.
Joshua called out Tyson Fury in the wake of his victory over Klitschko, with the possibility of an all-British super-fight at Wembley gathering pace.
Fury has not fought since he dethroned Klitschko in Dusseldorf in November 2015. In the 18 months he has spent out of the ring, the former world champion has blown up to over 25st.
He is hoping to return to competitive action in July. But he had a UK Anti-Doping hearing on Monday and remains without a boxing licence.
on May 10, 2017
Email ThisBlogThis!Share to TwitterShare to FacebookShare to Pinterest
Labels: Anthony Joshua