Manchester City Banned for Two Years from Signing Under 18 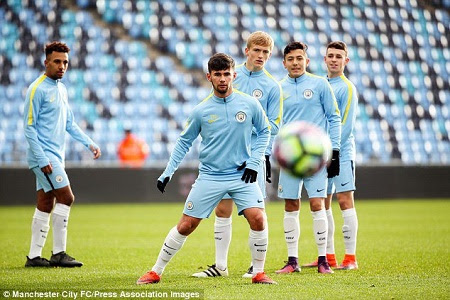 Manchester City were slapped with a ban on signing academy players on Friday after tapping up two schoolboys.

The two-year embargo handed down by the Premier League was the same as Liverpool faced last month, with the second year suspended for three seasons.

But City’s £300,000 fine was three times that of their North West rivals in a case thought to centre on an 11-year-old from Everton and 15-year-old at Wolves.

Sportsmail understands City admitted wrongdoing once evidence was produced to them and will not be appealing the decision, which does not stop them landing targets from abroad.

A third academy transfer was being scrutinised by the Premier League but Louie Moulden – son of former City striker Paul – is free to complete his switch from Liverpool.

City were found to have contacted parents of the players too early in the recruitment process. Liverpool’s violation came by way of offering prohibited inducements to one player and his family.

The younger boy, now 12, will leave City immediately. The 15-year-old is expected to complete his GCSEs at the club’s partnered school, St Bede’s, until the summer of 2018

By registering academy players, clubs acquire the right not to have those players approached.

The club then owes certain obligations and duties to that player under the EPPP regime, such as educational commitments and coaching hours.

A registered academy player, or a player who has a pre-registration agreement, cannot be directly or indirectly approached (or even talked about in public) by another club.

A registered academy player is also prevented from approaching other clubs himself or through his family.

There is, however, nothing to stop a club approaching an unregistered player who is training with an academy.

‘As a result of the club’s breaches, the players’ registrations will be terminated on a specified date, with no compensation rights retained by the club, and the club will not be permitted to re-register them as academy players.

‘Manchester City has offered to pay compensation to each player’s previous club, and maintain educational provision for each player until the completion of his GCSEs.’

City – whose academy has won plaudits after the club moved into a new lavish training complex in 2014 – are understood to remain on the lookout for new talent from across the continent.

Their Under 18 manager Lee Carsley suggested more new faces are set to join, claiming City’s stars of tomorrow are ‘on trial every day’.

‘We’re constantly looking around Europe for better players than what we’ve got,’ Carsley said.

‘As soon as they stop developing and stop learning they become at risk of being replaced. They’re used to it.’
on May 07, 2017
Email ThisBlogThis!Share to TwitterShare to FacebookShare to Pinterest
Labels: Manchester City