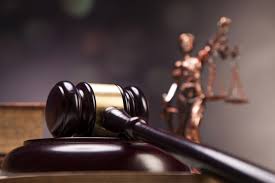 A Lugbe Area Court, Abuja, has ordered the remand of 35-year-old man, Joseph Prince in prison custody for allegedly parading himself as a lawyer.

Prince of Central Area, Federal Secretariat is facing a charge of impersonation. The judge,
Garba Ogbede , ordered
that the defendant be remanded in Kuje Prisons and adjourned the case till May 12 for further hearing.


The prosecutor, Ndidi Ukoha, had told the court that a legal practitioner, Jolly Obazee , caught the defendant at Lugbe Police Station on March 20.

Ukoha informed the court that on same date at about 10 a.m. the defendant introduced himself as Barrister Joseph Prince , whereas he was not.

She added that a Penal Code and an identity card of a law firm, where Prince claimed to be working were recovered from him.

At the resumed hearing, Obazee told the court that he caught the defendant on March 20 at Lugbe Police Station parading himself as a legal practitioner.

Obazee said that as a legal practitioner, he became suspicious because of the way the defendant was dressed on a Monday morning.

He said he reported the matter to the investigating officer and he called the defendant and asked him his name.
“He introduces himself as Barrister Joseph Prince; his name was sent to branch secretary of the Nigeria Bar Association (NBA) for confirmation."

“There was no name as Joseph Prince and the defendant claimed to have been called to bar in 2011,’’ Obazee said.
The legal practitioner said that he and the vice chairman of Abuja branch of the NBA, Mr Babatunde Oyefeso and two police investigating officers went to NBA office at Central Area in Abuja for investigation.

He said that they discovered after cross checking that there was no name as Joseph Prince .
on April 06, 2017
Email ThisBlogThis!Share to TwitterShare to FacebookShare to Pinterest