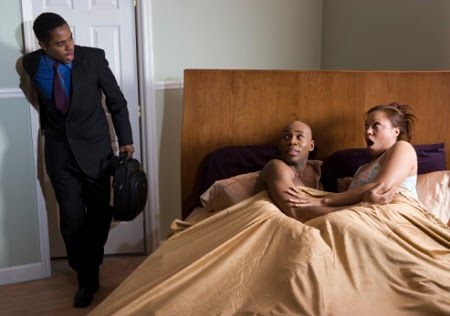 *Photo used for illustrative purpose*
1. MAINTAINING AN ACTIVE ONLING DATING PROFILE
Why it counts: Even if you’re not consistently having s*x with someone on the side, maintaining an online dating profile hints at the fact that you want to—at least, 70 percent of women seem to think so.
“Maintaining an online dating profile falls into the emotional infidelity pot. It’s saying that you don’t feel confident enough in your primary relationship to share all of it with your mate,” explains relationship and family therapist, Paul Hokemeyer, Ph.D. “In short, you feel you need to hedge your bets and keep your options open. Not only is it greedy, but it’s also insulting to your primary relationship.”
Your move: RIP to your Tinder profile. If you’re serious about your partner, this means you should delete it completely. If you’re hesitant to do so, you should reassess whether or not you’re ready to settle down with one person, says Hokemeyer.
2. BEING EMOTIONALLY INVOLVED WITH SOMEONE ELSE
Why it counts: 61 percent of women agree that you don’t need to be physically intimate with someone to care about them inappropriately.
Do you think about another woman constantly? Call and text her when your wife isn’t around? Think about what your life would be like if you were with her? Rely on her for emotional comfort when you’re angry or stressed? You may be having an emotional affair, says Hokemeyer.
Naturally, you should have a variety of friends to go to for emotional support, he explains. But when your wife or girlfriend stops being your confidant, that’s a sign that you may not be with the right person.
Your move: If you find that you’re withholding feelings from your partner for fear of being criticized or judged, it may be a sign that it’s time to part ways, especially if there’s someone else in the picture that does give you the sense of comfort you’re looking for, says Hokemeyer.
3. SENDING FLIRTY TEXTS
Why it counts: Just under 60 percent of women say your flirtatious messages are a major red flag. That’s because even though it’s not full on sexting, flirty messages can be a slippery slope, says Hokemeyer.

“Instead of being based on our primal sexual needs, [flirty texts] are based on our need to be seen, heard and desired,” he says.
If what you pass off as “fun” and “innocent” violates boundaries you and your partner have agreed on (whether they’re implied or you’ve discussed them), then you’re crossing a line.
Your move: If she’s uncomfortable with messages you’ve sent to other women, and your relationship means a lot to you, cut it out.
You should recognize what’s happening and ask why you’re looking to flirt with others, says Jane Greer, Ph.D., author of How Could You Do This to Me? Learning to Trust After Betrayal.
Then, put that flirtation back into your own relationship. If you feel like you’re not getting what you need from your partner, but you want to make it work, you may need to talk to a pro about why that is to get to the root of the problem, says Hokemeyer.
4. GOING OUT TO DINNER WITH SOMEONE YOU’RE ATTRACTED TO
Why it counts: More than 40 percent of women say that wining and dining with another woman you’re attracted signals infidelity.
But this is where things tend to get a little tricky. There’s nothing wrong with being attracted to someone else. The human brain is wired to seek out potential mates, says Hokemeyer, so you need to be honest with yourself.

“Are you going out with them to get laid, or simply to enjoy their company?” says Hokemeyer. “Women consider these types of dinners cheating because they are risky. There’s a real risk they will turn into something more.”
Your move: Having dinner with another woman will probably make her feel insecure about your relationship, especially if you try hiding it from her. Put yourself in her shoes: Why invest your time and money in another woman when you have her?

“Before you fill your ego up by having the dinner, consider the costs to hers,” says Hokemeyer.
5. GOING TO A STRIP CLUB WITH THE GUYS
Why it counts: Would you be comfortable with your girlfriend busting out dollar bills to surround herself with hot men flopping their junk in her face? There’s a reason nearly 30 percent of women are turned off by strip clubs.
If you’re comfortable enough planting your face in someone else’s boobs, she’s probably going to assume that you have no problem with crossing those boundaries outside of the club, too, says Hokemeyer.
Your move: Don’t want to miss out on your best friend’s bachelor party? Save yourself the heated argument and just ask her if it’s okay first, suggests Hokemeyer.