Unbelievable! Chicken Gets Locked in Prison for Committing a Crime...See Shocking Details (Photo)

In what will come across as a really shocking development, a chicken has been thrown into prison for committing a crime. 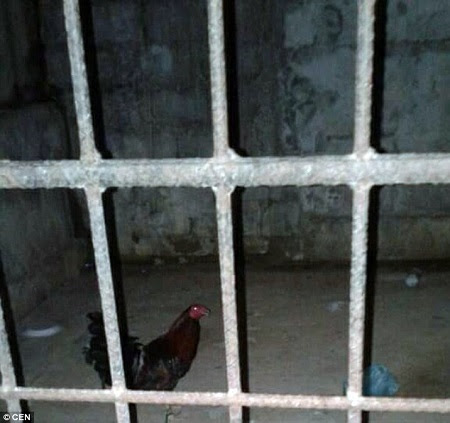 The chicken thrown in prison
A rooster has been jailed in Honduras, an incident which caused a stir among people who considered it quite hilarious.
According to Daily Mail UK, the chicken was jailed after causing chaos when he invaded a neighbour's field.
The bird was caged by police after his owner got into a fierce row with another man in the city of Trujillo in the northern Honduran department of Colon.
Officers incarcerated the cockerel after it raided a plot of land, climbing trees and shattering the peace with loud cries.
The land owner threatened to silence the offender - only for the owner to retaliate by warning: 'If you kick the rooster I will kill you.'
The row escalated and concerned neighbours called police, fearing the men were about to hurt or even kill each other.
Instead of arresting the men, officials captured the rooster and took it to the local jail - promising to free him only when the men reached an agreement.
A picture shows the brown and black cockerel wandering around its cell and looking out through the bars.
Other pictures shows the chicken being checked in at the prison’s desk, and officers attaching an identity tag to its leg.
The arguing men were not named in local reports.
on January 27, 2017
Email ThisBlogThis!Share to TwitterShare to FacebookShare to Pinterest
Labels: chicken in prison