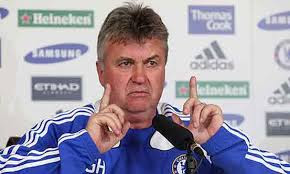 Former Netherlands boss Guus Hiddink has been appointed interim Chelsea manager until the end of the season following the sacking of Jose Mourinho. The 69-year-old also managed the Blues on a temporary basis for the final three months of the 2008-09 campaign.

"I am excited to return. Chelsea is one of the biggest clubs in the world but is not where it should be at the moment. However, I am sure we can all turn this season around, the Dutchman said.
on December 19, 2015
Email ThisBlogThis!Share to TwitterShare to FacebookShare to Pinterest
Labels: Chelsea manager, Guus Hiddink